A Reminder Why Ernie Needs To Be Fired Now Rather Than Later... Spoiler Alert: Dwyane Wade 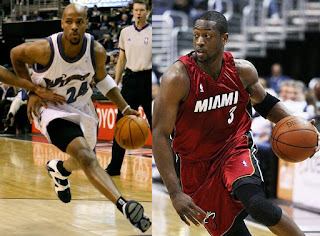 As of today March 26, 2019 we are currently 96 days away from the 2019 NBA Draft. That is enough time to #FireErnie, find and hire a new General Manager of the Washington Wizards. The new GM can get his team in place to examine the team, get his scouting team in place domestically and internationally, and get the draft board ready. Every second counts and we can't wait until the end of the season to let Ernie go. If this doesn't happen we are doomed to repeat the past. And the past is telling us is to be prepared or we could miss out on a generational player like Dwyane Wade. Thanks Eddie Jordan...

A General Manager isn't going to hit on every first round draft pick. I think we all can agree on that. I think what makes a good GM in regards to drafting is of course getting the draft pick right more then you get it wrong and recovering from a mistake. In this case, we have Ernie Grunfeld which is notorious for making mistakes for that past 16 years and later I'll compare him to the multiple GM's that were in Toronto for that same span. In this post we're only focusing on his First Round Draft Picks and then track what he did with those assets whether he kept, traded, or let go in free agency. First Round Asset Tracker (FRAT). Here is an example

In 2007 Ernie Grunfeld drafted Shooting Guard Nick Young with the #16 pick. Outside of his shooting and some defense in his years as a Wizard he was a part of producing a bad culture here. In 2012, Young was a part of a package deal in a trade for Nene. The "*" you see next to Young's name means he was a part of a package deal on that trade which could include other players, draft picks, cash, and a Trade Player Exception (TPE). This trade actually changed the culture in DC so a win for Ernie here but when you look deeper this costed us three first round draft picks for four years of an older Nene. Nene in a way was a product of the 2007, 2008, and 2011 first round draft picks as you'll see later.